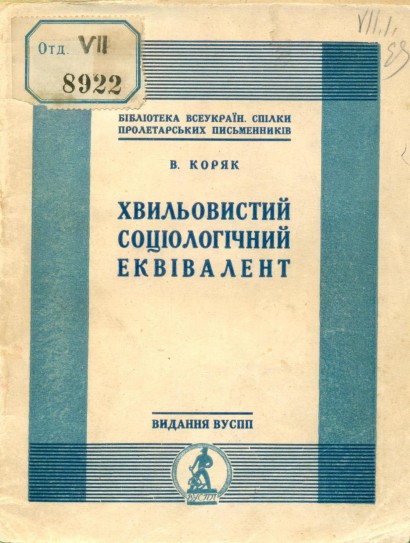 n the 1930s, V. Koriak, the author of this book, was an influential literary critic and distinguished himself by defeating speeches against many writers. His book "Khvylovystyi sotsiologichnyi ekvivalent” can be considered as such a statement.
In the first half of his work, Koriak criticized the works of artists (Burachek, Simonov, Narbut, Lozovsky, Kasian, etc.) that were exhibited at the First All-Ukrainian Exhibition of the Association of Revolutionary Ukrainian Art.
Koryak believes that the state should control and regulate the life of art, because the main task of art is to influence the masses with the class ideology, to strengthen the influence of the ruling class. And just as the Koriak mocked artists, he mocked poets and writers. Especially Khvylovyi made him angry. The critic accuses the writer that he has lost the ideological ground under his feet, that he does not understand what national culture is, treats the young komsomol poetry arrogantly and looks for a sociological approach, a sociological equivalent in everything. Koriak blames Khvylovyi for what the writer is still appreciated and loved by readers.