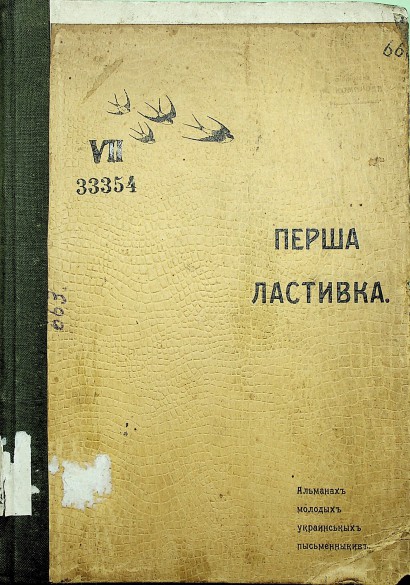 Mykola Fedorovych Cherniavsky (1868-1938), poet, educator, country activist took an active part in the creation, arrangement and publication of literary almanacs, in particular in the South of Ukraine, where despite of all the censorship prohibitions the process of national development had constantly gathered pace.
Under those conditions M. Cherniavsky saw the development of Ukrainian fiction exactly in the publication of nonperiodic collections and almanacs, and that is why he called on writers, in particular young ones, to accumulate forces in this direction of work.
The almanac "Persha lastivka" was the first separate publication of works of novice writers in Ukrainian literature which testified M. Cherniavsky’s concerns about the development of writing in native language and attempts to pour "new forces" into the development of Ukrainian culture.
The criticism of that time generally approved the appearence of a separate publication, where young authors who aimed to write in Ukrainian got an opportunity to publish their works.
A copy of Odesa National Scientific Library was previously kept in the private collection of M. F. Komarov (1844-1913), a well-known Ukrainian bibliographer, ethnographer, public figure, as evidenced by the owner's stamp on the cover and on the title page.