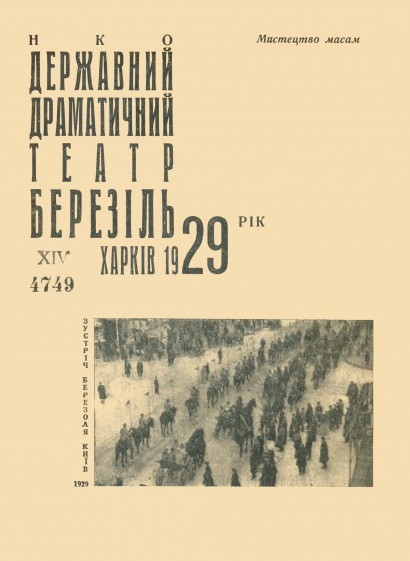 The brochure is dedicated to the results of the theatrical season of 1928-1929 and was issued to Kyiv tours of the Les Kurbas Theater "Berezil", which took place from May 1 to June 4, 1929. The first years of the existence of the theater are described by V. Meller's article "Berezil"; the next – materials from the newspapers: «"Meeting of the “Berezil”» by Romanenko (Proletarskaya Pravda, Kyiv, 1929, May 1),"Meeting of the Kharkіv Rabcors with Ukrainian art figures "(Proletari, Kharkiv, 1929, April 23), "The People's Malakhii" (“Berezil”)" by K. Kravchenko (Proletarskaya Pravda, Kyiv, 1929. May 30), "From the discourse on the production and play "The People's Malakhii" – incl. texts of speeches by Mykola Kulish and Les Kurbas (Vechirniy Kyiv, 1929, May 31). The brochure is illustrated with numerous photographs – portraits of Berezil's directors, actors and workers, scenes from new theater performances.