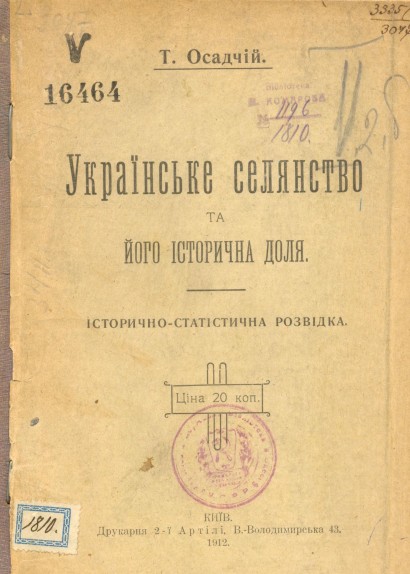 Tykhon Ivanovych Osadchy (1866-1945), Ukrainian public figure, economist, cooperative movement theorist, one of the leading land statistician of Ukraine, author of about 120 scientific works on dedicated to the issues of landowning and land use, distribution of peasant farms. T.I. Osadchy was aware of necessity to study and preserve historical and cultural heritage of people. His monograph «The Ukrainian Peasantry and its Historical Fate» begins chronologically from the middle of the 14th century. The work is divided into introduction and three short sections: "The fate of the peasantry in the history of Ukraine", "The dependence of a serf peasant", "Ukrainian peasantry after 1861".
A copy of Odesa National Scientific Library was previously stored in the private collection of Mykhaylo Komarov (1844-1913), a famous Ukrainian bibliographer, ethnographer, public figure, as evidenced by the owner’s stamp on cover and the title page.